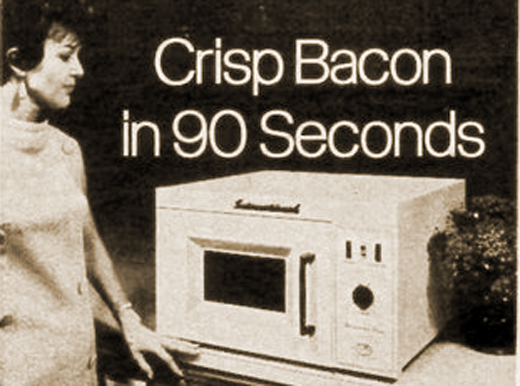 Throw away your microwave oven immediately!!!

“There are no atoms, molecules or cells of any organic system able to withstand such a violent, destructive power for any extended period of time, not even in the low energy range of mill watts… This is how microwave cooking heat is generated – friction from this violence in water molecules. Structure of molecules are torn apart, molecules are forcefully deformed (called structural isomerism) and thus become impaired in quality.”

Microwaves are radio waves with frequencies around 300 MHz (300 million cycles per second) to 3 GHz. RF, a form of non-ionizing radiation.

A microwave oven is a kitchen appliance that cooks’ food by exposing it to microwave radiation. When we put food inside and turn on our microwave oven alternating current forces atoms to reverse polarity at an astonishingly high rate which creates such violent friction that the water inside the food molecules begin to vibrate and heat up, a process known as dielectric heating. This process is still in motion after the microwaved food is removed from the oven, the water molecules are still bouncing around creating more heat and most of us do not chew our food until it is liquid (recommended way to eat) so if whole or unchewed piece are swallowed at such high temperatures and still cooking, this food could possibly burn tissue causing damage in your mouth, throat and stomach.

The microwave oven was first invented by the Nazi’s to provide a method of cooking for their troops during World War II, calling them the “radiomissor”. After the war the Russians decided to conduct studies on the microwave oven and after years of studies they decided to ban it in the Soviet Union (the ban was later after a few years lifted by the political movement that destroyed the Soviet Union). Followed by an international warning of biological and environmental effects of the microwave oven. After the war, Dr. Percy Spencer, a self-taught engineer with the Raytheon Corporation, claimed to have “invented” the microwave oven in 1946. The Raytheon Corporation did actually file the first U.S. patent on one. The first ones were called Radar Ranges in 1954.

Russian Studies on the microwave found the following concerns

I remember when my family first got a microwave, everyone was so excited, it was almost too good to be true, heating up your food with no mess to clean up from using the stove or a toaster oven, defrosting frozen meat in 20 minutes instead of waiting all day or putting it under running water in the sink. They are a quick convenient way to cook or heat up our food. Most every American has one of these on their kitchen counter or attached to the wall above their stove. And I am telling you today to throw it in the garbage and never look back. If it is attached to your stove use it as an extra storage space and stop using it immediately. Radiation is omitted when your microwave oven is in use.  Not only is it destroying your food, but it is destroying your body as well. I don’t need a scientific study to tell me that microwaved food is poison.

The FDA has strict guidelines on the locking devices to keep the microwave door shut while cooking because radiation leakage can cause serious problems. And these same government agencies tell us that cooking our food in radiation will have no effect on the food or our bodies. It is recommended that you do not stand close to the microwave oven while it is on and there is no telling how much radiation can leak out when the oven ages and the seals on the door are worn and old. Not only is there massive microwave energy (radiation) floating around inside the microwave oven while your food is being cooked but a lot of food people are cooking in this oven are processed and full of chemicals, not really a good idea to heat up a ton of chemicals and then digest them. Even vegetables come in so called “microwave ready” plastic bags. Cooking your food in plastic containers containing BPA is also a very bad idea.

Microwave Sickness (radiation) happens when tissues in the body are directly exposed to microwaves from you household microwave oven, cell phone towers or anything that uses microwaves for energy and emit this type of radiation. The following signs and symptoms can occur after high levels of microwave radiation exposure!

How to Protect yourself from Electromagnetic & Microwave Radiation

This is Woody Harrleson’s two-minute message to the world that is time to change, it’s time we start supporting the companies that have our best interest and the interest of our planet at heart. We as the people have the power to make change and the power is in our pocket. If we demand better food and products they will supply them.

We get into the habit of buying junk fast foods that have no actual food in them. We buy gallons of poisonous household cleaners when one degradable soap would do. We are poisoning our homes and wasting our hard earned money for no good reason. Why? Because the advertising industry tells us to. They just want you to buy stuff.

For example, if a company pollutes the environment or uses bad business practices, if you don’t buy their stuff they would change; if you don’t want food with chemicals or GMOs in it, then don’t buy it. The minute we start taking responsibility and spending our money wisely, every politician, every corporation and leader around the world is gonna know that we have woken up.

This is the 21st century. If we use our resources wisely, there’s no reason why anyone shouldn’t have what they need. There is no reason, whatsoever, why people are still starving to death on our planet. The common man or woman whether they are Israeli or Palestinian, Prostestant or Catholic, Iraqi or American, common man just wants to live in peace and justice in a clean environment.

When we look around the world and we see that, that is not the case, we know that the will of the majority is not being listened to. That’s the first sign that our system is broken. Government won’t make these changes for us; yet again it is down to the common man.

No company will continue a practice or product that you, the consumer, will not buy. It’s vitally important that you understand this because this gives you ultimate power to change the world you live in.

Companies are extremely sensitive about you buying their products because if you don’t buy their stuff, they go out of business. That is not many companies are willing to consider and by choosing to spend your money wisely you can promote those companies that do business in a socially responsible way.”

Ten Reasons to Throw out your Microwave Oven

From the conclusions of the Swiss, Russian and German scientific clinical studies, we can no longer ignore the microwave oven sitting in our kitchens!

1). Continually eating food processed from a microwave oven causes long term—permanent—brain damage by “shorting out” electrical impulses in the brain [de-polarizing or de-magnetizing the brain tissue].

3). Male and female hormone production is shut down and/or altered by continually eating microwaved foods.

4). The effects of microwaved food by-products are residual [long term, permanent] within the human body.

5). Minerals, vitamins, and nutrients of all microwaved food is reduced or altered so that the human body gets little or no benefit, or the human body absorbs altered compounds that cannot be broken down.

6). The minerals in vegetables are altered into cancerous, free radicals when cooked in microwave ovens.

7). Microwaved foods cause stomach and intestinal cancerous growths [tumors]. This may explain the rapidly increased rate of colon cancer in America.