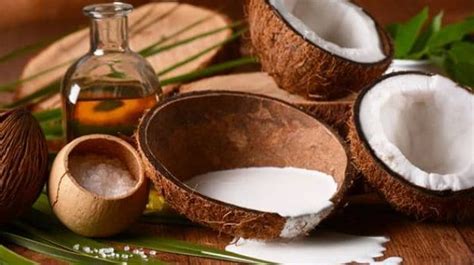 The coconut tree (Cocos nucifera) is a member of the palm tree family and the only living species of the genus Cocos. The term “coconut” (or the archaic “cocoanut”) can refer to the whole coconut palm, the seed, or the fruit, which botanically is a drupe, not a nut. The name comes from the old Portuguese and Spanish word coco, meaning ‘head’ or ‘skull’ after the three indentations on the coconut shell that resemble facial features.

Coconuts have been used by humans for thousands of years, and may have spread to their present range because of Pacific island settlers. The evolutionary origin of the coconut is under dispute, it may have evolved from South America, Asia or on Pacific islands.

The popularity of coconut has spread far and wide. There are variety of ingredients derived from one plant from coconut oil, coconut meat, coconut flour, coconut milk, coconut sugar, coconut mana (a paste made out of coconut meat), dried coconut flakes and of course coconut water. The debate has been on about how can a food so rich in saturated fat could be so good for us.

To date, there are over 2,000 studies proving coconut oil to be one of the healthiest foods on the planet. Coconut oil uses and benefits go beyond what most people think. The oil is made from copra the fresh coconut meat, it is truly a super-food.

I am a huge advocate of coconut oil and use it for boosting my energy levels, reducing inflammation and supporting cognitive function and heart health.

Coconut oil continues to astonish doctors by its ability to kill viruses such as measles, influenza, flu, herpes, hepatitis C, bacteria such as candida, staphylococcus aureus, thrush, and ringworm.  This is due MSFA’s in coconut oil, they basically strengthen your immune system. Almost 50% of the fatty acids in coconut oil is the 12-carbon lauric acid, when coconut oil is enzymatically digested, it forms a monoglyceride called monolaurin. Both lauric acid and monolaurin can kill harmful pathogens likefungi, viruses andbacteria.

If you’re not aware MCFAs are Medium Chain Fatty Acids, most of the fat we consume are long chain fatty acids that must be broken down before they can be absorbed. Coconut oil is high in short chain fatty acids, which are easily digested and sent straight to the liver from the digestive tract, where they are used for energy production. While in the liver these short chain fatty acids turn into so-called ketone bodies, which can have therapeutic effects on brain disorders like epilepsy and Alzheimer’s. The medium-chain triglycerides (MCTs) in coconut oil can also increase 24-hour energy expenditure as much as 5% compared to the same number of calories from long chain fatty acids, potentially leading to significant weight loss.

When consumed, coconut oils anti-microbial properties become activated after triglycerides are converted into monoglyceride and free fatty acids in the digestive tract. Monolaurin, the monoglyceride of lauric acid has the greatest overall anti-bacterial, anti-viral and anti-fungal effect. They all work together synergistically to provide a strong germ-killing effect. They are enclosed in a lipid (fat) membrane and lipid coated viruses and bacteria are absorbed into the organism’s outer membrane. These fats have a destabilizing effect which weakens the membrane to the point that is disintegrates and falls apart, killing microorganisms. This process is so effective it can kill super germs that have become resistant to antibiotics. Studies have shown that coconut oil plays a key role in healing and soothing inflamed tissues along the digestive tract. If you are suffering from conditions like Crohn’s disease, colitis, ulcers, Irritable bowel syndrome and many other digestive disorders coconut oil may provide you with some relief from the pain and discomfort you may be experiencing.

Coconut oil has been shunned in the past because it contains saturated fat, which actually do not harm the blood lipid profile like previously thought. It’s also one of the richest sources of saturated fat known to man, almost 90% of the fatty acids in it being saturated. Saturated fats raise HDL and improves blood coagulation factors and antioxidant statues while reducing triglycerides, total and LDL cholesterol, which may translate to a reduced risk of heart disease.

In some parts of the world coconut is a dietary staple that has been thrived on by its people for generations. Much like the Tokelauans, who live in the South Pacific, they eat 60% of their calories from coconuts. History and lots of documentation show us that coconut oil has been used worldwide for thousands of years as a source of food and medicinally.

Anti-protozoa (kills giardia, a common protozoan infection of the gut)

Coconut milk and cream are used in many dishes in Thailand

Nontoxic to humans and animals

Has no harmful side effects

Made from fresh coconuts

Buy one made with no hexane

Made coconut that have been dried, these flakes are often bleached, deodorized and refined using chemicals leaving behind a colorless, tasteless and odorless product)

Steam refined is the healthy way to refine coconut flakes

Loses health properties weather it is refined with steam or chemicals

Long and medium chain fatty acids are removed; this lowers its melting point so oil stay in liquid form

NOT recommended for consumption

Suggested serving size of coconut oil when taken as a supplement

Coconut oil may be consumed by children under the age of 12, it’s advisable to check with a healthcare practitioner on proper dosage. I know parent who give their toddlers 1 to 2 teaspoons a day as a supplement. Remember coconut oil is the only other source of Lauric acid, which mimics mother breast milk.

Coconut Oil Oral supplement Take 1 to 3 tablespoons a day, depending on weight. Start with one and allow your body to get used to it and work your way up to more doses

Fresh Young Thai Coconut Meat to Eat and Coconut Water to Drink Hack off the top (I use my machete but you can buy coconut openers on Amazon). Drink the coconut water immediately. Crack in half and use a spoon to scoop out the meat to eat fresh or to put into a smoothie

Healthy Apple Crisp in a Skillet